I had been wanting Battletoads for a while. So one day I walked into Funcoland, asked for the game, slapped down five bucks, and was merrily on my way. I got home, gave to cartridge a thorough cleaning (as I do with every newly purchased game) and slid it into the deck. A blue screen. Hmm...after a bit more cleaning, another blue screen. So I cleaned my NES deck. Nothing. And it went on like this. Now, I'm not bragging, but if I can't get a game to work, there's some problems, and it has nothing to do with me or my NES.

One day, after more unsucessful cleaning, I lost my temper. I grabbed a hammer, and let the sucker have it. Now I'm the (un)pround owner of some cartridge pieces. I felt it was necessary to write EAT SHIT FUNCO on the pieces. They cheated me out of five bucks (and that's not the first time they've sold me something that was broken). Oh well, I'll pick up another copy someday. 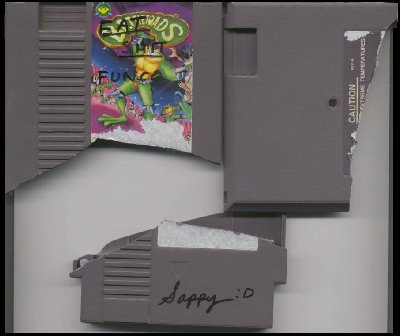