My NES of nine years had pretty much ceased to operate the way I wanted. Resetting, crashing, and it was a pain in the ass to get to work. So, I got myself on eBay and started to shop around for a top loading NES. Now if you're not familiar with the top loader, there's a picture above. It was released in late 1993 as a last ditch effort to milk every last dime out of the dying NES. Christmas came, nobody bought the top loaders, and they instantly became rare. The $49 price tag wasn't the problemŚthe fact that it was an NES was. A few stores like Toys 'R Us sold off their stock a few years ago so your chances of finding one there is slim.

First, there's no blinking power light, dirty or crashing games! YES! The architecture is very similar to the Super Nintendo. In the SNES, if you pop in a game, 95% of the time it'll start right up, no problems. The other 5% you may need to give it a quick clean, reinsert the game, or hit the reset button. Same case with our top loader. So far, I've never had a game crash on me unless something kicked the cartidge or system. This is definitely by far the BIGGEST REASON TO GET ONE. If you're like I used to be, constantly struggling to get games to even start up and stay on, this is for you. I can play through long games like The Legend of Zelda and Ninja Gaiden without worrying about it screwing up, and if I want to walk away from the unit for a few hours!

Now, the actual structure. This game deck is impressive looking. It's sleek, smooth and streamlined and looks very nice on your shelf. It's way smaller than the greybox, tooŚ67% smaller according to some quick measurements. 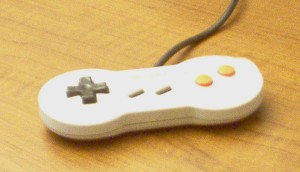 The unit itself came packaged with the handy dandy controller seen above. Commonly referred to as a "dogbone" because of the obvious shape, it's pretty comfortable. The back is rounded and there's no "sharp" edges to cramp your hands up. My only complaint about these is that they're kind of small, so you people with big hands beware. If you find you just have to get your mitts on a dogbone, Nintendo still sells them new at their online store. They're in the NES section but aren't specifically called the new style, so be sure to e-mail them first to confirm.

Not many, thankfully. First off, the price. If you're buying off eBay be prepared to shell out $65 to $80 plus shipping, and even more if it comes with some games or accessories. You can usually get them for so much cheaper if you ever find one in a pawn shop, Funcoland, or flea market, but your chances of finding one there is much lower than eBay.

Secondly, to cut down on cost, Nintendo omitted the A/V out ports. This is pretty bad as you must rely on RF to get the signal to the TV. This also prevents you from hooking it into a stereo without routing it to a TV or VCR first. Since I don't do that in the first place, it's not a big downside for me.